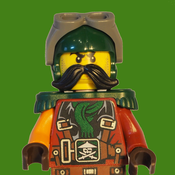 Be ready for the Turtle Mech!

My idea for a potential new LEGO set is based on the cult super heroes series Teenage Mutant Ninja Turtles. The Turtle Mech appears in the last episode of season two of the new animated series of Teenage Mutant Ninja Turtles. It  is a huge mech and each extremity is controlled by each Turtle separatley. This kind of controlling is based on the Turtles favorite TV series Super Robo Mecha Force Five.

My set features Donatello, the engineer of the team and Michelangelo, the most humorous Turtle of the four. Furthermore a foot soldier appears to fight against the two Turtles and the mech. Moreover the biggest foe of the Turtles emerge: the Shredder! With his metal claws he is the greatest villain in the Turtle universe.

The Turtle Mech is the most magnificent machine Donatello ever built.

The legs and arms of the mech are flexible to arrange them in every possible position you want to do them. The right arm of the mech has a shooting function that allows you to flick the ´fingers´ to grap a foe. Furthermore on the top of this shooting assembly are two more flick shooters to improve the playability of this mech.

It has the highest level of detail possible and is made with a new building technique that makes it possible to attach two bricks with their bottom. So I was able to bring the back of the mech to a high level of detail and the front of the mech usable for the minifigures.

It was important for me to make it completley playable and very stable for the use for children.

Whether you are a fan of the Turtles or have children, there is something to enjoy on this set for everyone.

If you would like this idea to become a new Lego set, then please click the blue ‘Support’ button in the top right of the page! It’s completely free to support and create a Lego ID.

See the video for further descriptions: