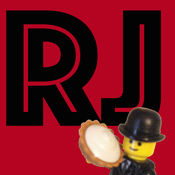 Get ready to open your baskets!

Based on the hit Food Network TV series, I propose a lego Chopped set. Creativity is the driving force behind this program, behind all culinary arts actually, which makes this a perfect theme yet to be explored further in lego form.

This set will allow you to recreate iconic scenes from the show as well as a springboard for all new Chopped experiences that can only be limited by your imagination!

The main part of the set is the cooking area, where four seasoned chefs prepare themselves to discover what crazy and unique ingredients their baskets contain. Can they escape the dreaded chopping block? That decision falls to the three Chopped judges; three chefs from among the greatest culinary minds the world has ever seen. They oversee the competition from their special stand, eager to taste the dishes and to decide who gets to continue. No pressure!

There to guide the chefs on their journey is the show's premiere host, Ted Allen, who is prepared to both instruct the competitors and reveal the unfortunate dish that didn't cut it.

The lego set will include the kitchen area and the judges' table; I designed the set to be as close to the real tv set as possible within my abilities. I endeavored to include even small details: from the copper pipes that lead from the ovens to the wooden support beam that has two chef's knives wedged into it. Details such as the countdown timer and the table logo can be printed on the brick directly or as stickers.

The minifigures included in the set would be the following:

All the above mentioned are great experienced chefs who have appeared on the show as judges many times, fans of the show will be delighted to own miniature versions of these culinary masters!

The set is not limited to just the kitchen and judges' table; the pantry can also be included along with some of the most infamous tools used on the show (the ice cream machine anyone?). Expansion to this set to include more elements from the show are welcome.

I personally absolutely love this show and would love the idea of having a small lego version of it to display and enjoy, as well as expand upon with my personal lego collection. I'm positive that there are many other fans who feel the same, so please support and follow, and may the bricks be with you!