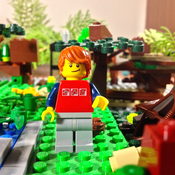 Discover your hidden musical talents in a whole new level through LEGO with This LEGO set proposal!

Hop on the stage and play any musical tune that sounds in your head, as the band joins in to play with you! Play the music that comes from your heart and remember we all have our hidden talents!

I really enjoy playing music and building with Lego that is why I have joined them together to create this LEGO music band! I think that if this band was turned into an official set it would be inspirational to both children and adults and it would be a great gift for anybody. This set can easily be a part of your Lego city either indoors like in a theater or outdoors like a concert at the park, and even if your not a big fan of actually building cities out of Lego, you can place this nice little set near your work space at home or in your office to give you inspiration! I would really want it to become an official LEGO set.

I would appreciate your help reaching 10,000 supporters to make this LEGO musical band into an official Lego set. Its easy, you can do it, build it!