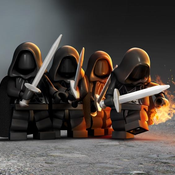 The Manasseh is a multi-terrain fighter or scout ship.  It's wings fold down into landing gear, and then fold up again to ensure maximum maneuverability. The entire cockpit can open up, allowing the pilot comfortable space to work in. There is a canon on each wing, and four missiles that can be deployed. On the nose of the ship are two sensors that give the pilot the temperature, the contents of the space outside (for example the oxygen levels or the presence of poisonous gasses) and, when possible, the wind speed. They also emit and receive radar signals, switching to sonar when under water.

In Jack Sparrows words: "What a ship is... what the Black Pearl really is... is freedom. The Manasseh is named after an ancient king who, after years of leading his people from evil to evil, changed his life and did his best to turn the country around. I used the Manasseh to escape my sometimes boring and monotonous life, and fly into my own world, full of creativity and life. It is a ship of new horizons, of leaving the old and racing towards the new, of hope, of light, and most of all, freedom.

I would like to thank my amazing brother for his assistance in the completion of this project (finding and trading pieces) and his help with the photography. Next I want to thank my dad for his help and advice for the editing of the pictures. Last, but not least, I want to thank my awesome Father for the opportunity and inspiration. May all the glory go to him.