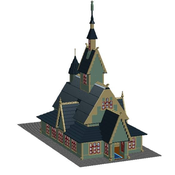 Today is most certainly a perfect day. Frozen Fever comes out today in front of Cinderella. And Disney just confirmed Frozen 2 on Thursday. How can it get any better than that?

Well it can with a Lego Set inspired by Disney's Frozen. This is the cathedral in Arendelle where Princess Elsa officially becomes Queen Elsa of Arendelle, as seen in the movie Frozen.

I decided to make a UCS version of the cathedral because of Frozen's huge fan base, the amazing architecture the buildings in the movie were inspired by, to add to overall playability, and to see if it was possible.

Playability: I believe that this item has great playability features. The roof is removable in three section which allows the inside to be accessed easily. It also contains lots of seating so you can imagine various people attending the Coronation and would be an interesting way to display your minifigures. This set would also allow you to act out some of your favorite moments from the movie Frozen.

This set would probably include at least three minifigures. It would include Elsa in her Coronation Dress, as well as Anna in her coronation dress, and Hans.

If you like this project please help me share it with other Lego fans and with other Frozen Fans.

Also Please check out this project!