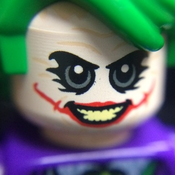 this is like lego polybag.It has 1 minifigures:the batman and a his weapon batrang,the main project is robot with 2 power hand saw.I made up like a robot spy planes or come to the aid of Batman and sometimes he will fly robot and sometimes he wants to fly to his robot connected to him self and it help to his flight.

the robot can be attached to the back of batman as a supplement to help batman fly.when you separate it is an independent robot.i did this project come to be polybag.when the project is approved and available for purchase as many people buy it because it is cheap and it has batman figure and a robot that is connected to his back.