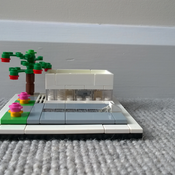 This penguin is made as part of a series that I am hoping to build on in the coming weeks and months. As you can see this is a brick built penguin made of common Lego elements that you probably have in your brick pile.

The mound of offset rock he is standing on, again is built using simple and common Lego elements which come with a ; barrel, 3x fish pieces and a zookeeper minifigure. I personally think that this would fit in well with existing  Lego play themes such as CITY and CREATOR. Obviously, the other option is that it is released as a separate series. These builds were mainly inspired by my visit to Chester Zoo, UK a couple of days ago.

Thank you for reading this and if you like what you see please share it with friends, family and why not the world? Happy building, Banksy22.