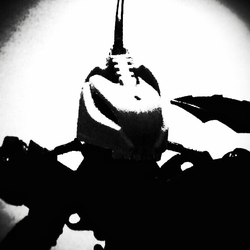 Very powerful in Battle, these Shock Troopers can eliminate many squads of enemy's before killed. On his face you can see a gas mask with the tubes running into it. They go back to the air tanks. This Zorian is a Lizardman, so this is adding to my Lizardman theme. ( by the way, the Achilles Class Destroyer is a Zorian ship. Just some little trivia for ya.)

The Zorians have six arms. The two ones holding the gun, and the four with the spikes. The ones with the spikes do nothing at all, they just look cool.

Zorians are usually dropped from Drop Pods from Battlecruisers and Carriers. ( I'll build those later.) the tail has some spikes on the end, which can impale there enemy's, but isn't used as a weapon. Shock Troopers are also have a welder to cut through doors and Ship Plating.