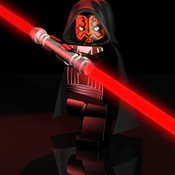 Finally the battle of A New Hope recreates in LEGO! This miniature set of all the same 1588 LEGO bricks represents the scene of fight between Luke Skywalker and a TIE squadron of hunter led by Dark Vador.

X-Wing gets ready to send the torpedoes of proton on the weak point of the death star, when a squadron of the empire chases after the young person Skywalker.
But it is without taking into account the fastest vessel of the galaxy! The millennium falcon, which arrives in time to allow Luke to destroy the death star !

I think that this set could interest the collectors (for the children they seem to me a little bit difficult to build but it is my opinion:)) and the amateurs of diorama LEGO

Turrets can turn on them and artillery can bow
The miniature ships get closer rather many normal versions and it is more an unpublished set!

Thank you for having taken a little of your time to look of a little bit closer at this set, do not hesitate to support me and to follow me for maybe by other future set:)