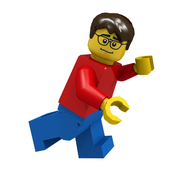 She was created by the awesome author Roger Leloup in 1970. The use of models is an important part of Roger Leloup's creative workflow.

Yoko is an electronics engineer who works in television.
On earth, she flies helicopters, planes, balloons, etc... that are series aircraft or prototypes.
She rides motorcycles, pilots fast cars as well as submarines, she sails, scuba-dives, you name it!
Did I say yet that she travels not only in space but also in time?
Despite her frail appearance, you should better not fight with her, as she is very skilled in Aikido.
She travels with Vic and Pol, her close friends, regularly in other galaxies with Khany, her friend from the planet Vinea.
She values friendship, sees the good in people and has strong sense of honor.

Her fans in the real world are both boys and girls, kids as well as grown ups. As a role model, she gave inspiration for many of today's engineers and pilots!

This set represents Yoko and Khany with a single seater aircraft used in "The Titans" and "The Archangels of Vinea" episodes.
It is my first attempt of matching both LEGO and YOKO TSUNO's universe. I hope the author and the other fans will forgive my approximations to fit a piece of one into another.

If you don't know Yoko and her adventures yet, it is not too late!

Any good bookshop should carry a set of her adventures. If it does not, well, there is room for improvement!