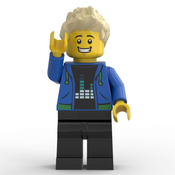 By jitsu97
22 comments
A long time ago a pirate captain was shipwrecked on a desert island while searching for buried treasure. His crew was nowhere to be seen, so he set work building a shack to live in using what remained of his old ship. The shack is built using wood and windows left from his ship. Within the shack is his old pirate hat, musket and cutlass, as well as a painting of his old ship before it was wrecked and the maps he was following to the treasure. There is also a bottle and glass. Outside the shack, the wheel from his ship is there for decoration, along with a telescope he has made from a glass bottle to help him search for any passing ships. He also grew a palm tree using what remained of an old lifeboat, so he could have some coconuts. The pirate has been there so long his hair and beard have grown much longer, he also now only wears leaves for clothes as the island is too hot.
I built this as I like nature and I like pirates, and it's not often that we get to see sets that show what happened to the pirates after they stopped sailing the seas.
I think this would make a great set as it has high playability as well as being able to be displayed in beach and ocean areas. Also, pirates are very popular.
If you like this then please support it, thank you.