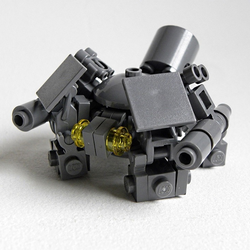 Set in the future, Batman and Superman are battling Warlord Lex Luthor in his giant robot!

Superman's battle against Warlord Luthor is going well, so Batman is coming to the rescue with his now upgraded Tumbler which has treads in the front and has much stronger armor, making it impervious to just about any attacks.

Last but not least, Warlord Luthor's giant robot! Standing at 9.9 inches it is a massive sight to behold. It has a large warhammer and can hold (or crush!) a minifigure in either of its hands. Warlord Luthor's robot is a sturdy build, and does not fall down easily.

If you want to see a futuristic Batman LEGO set, then please support this! And also support my other projects to...