By SenatorBlutarsky
15 comments
This set commemorates the historic collaborative effort between the American and
Soviet space agencies (NASA and ROSCOSMOS, respectively) in July 1975, a
mission known as the Apollo-Soyuz Test Project (ASTP).

This mission was considered to be a great success, both technically and politically. It was significant for a number of reasons. It was the first collaborative effort between the two previously competing space agencies, opening the way for future joint projects (e.g. the Shuttle-Mir Program and the International Space Station). The project was also also a huge technical success, meeting or exceeding all of its technical objectives -- it demonstrated the feasibility of in-space docking between two independently launched spacecraft. Finally, the Apollo-Soyuz project marked the final mission for any Apollo spacecraft (NASA began pursuing the Shuttle program soon thereafter, and didn't launch its next manned mission for another 6 years).

While it would have been nice to build this set at minifig scale, it is built a scale somewhat below minifig scale (probably about 0.6 x minifig scale) for two reasons. First, it allowed me to keep the part count down to a reasonable figure (fewer than 1,000 parts). More importantly, though, it allowed me to make good use of some the existing curved parts to represent some of the complicated shapes of the Soyuz (I'm not sure that I could have done as well at a larger scale).

The image below is a reverse-side view of the docked spacecraft, showing some additional details, including the antenna array on the Apollo service module and the pilot's optical sight on the Soyuz. 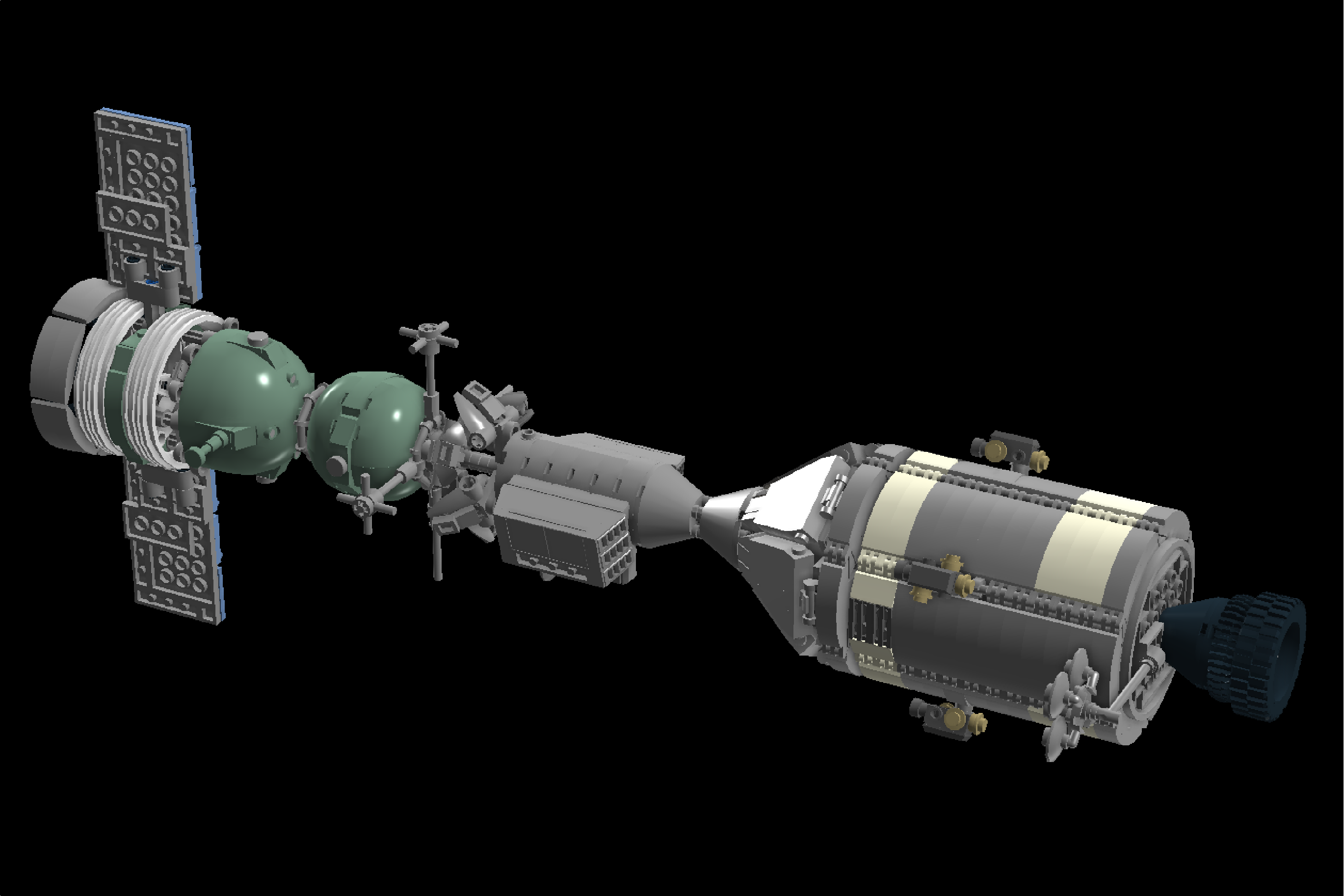 In the next picture, we have an exploded view, showing the Apollo service module, Apollo command module, docking module, and Soyuz spacecraft separately.

The next picture below is a close-up of just the Apollo spacecraft, giving a better view of a few of its finer details, including the brick-built American flag (I dislike decals) on the side of the service module. I've set it against a blue background here so you can get a slightly better view of the engine nozzle.

In the final picture, we have a close-up of the Soyuz spacecraft, showing the antenna array and the three-pronged docking mechanism (that interlocks with a similar mechanism on the docking module).

Higher-quality images of this model are available on my Flickr page.

GlenBricker has wisely pointed out that this model really needs a stand. I have rigged up a mock-up of what a simple stand might look like here. Given time, I am sure that I could develop something a little sleeker.

If you like this project, you might like some of my other projects, including the F/V Andrea Gail, the UCS Double-Ended Ferry, the Busy Micro Seaport, and the Superheavy Multi-Axle Transport Rig.