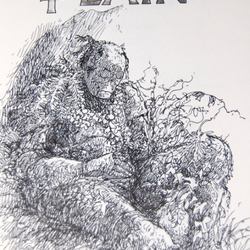 This is my idea of a Frontier Outpost in a fantasy world that I created. It is located in a part of the world called Saykar Forest. Behind the Outpost Wall lies the kingdom of Saykar where the Elven men live. They are Half Elf-Half Man and are constantly being attacked by the goblins.

The set is based on this idea which I thought would make a cool Lego set. It includes two goblin attackers, called Vazax and Kajan, and three defenders called Thallen, Dargol and Jall. I estimate it would cost around the region of £30-£50.