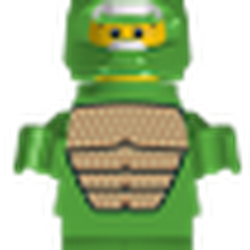 Introducing the Lake House! This project has been a long time in the making and includes lots of fun unique details! With tons of details let's start with the actual landscape and origin of this project. My grandparents live on a lake and own this nice little cottage like house lakefront! After spending many summer weekends there I was inspired to re-create their home in Lego! So here it is. The starting details are the house is meant to be set on a hill. The landscape itself was designed by (LegoBricker). It includes trees, shrubs and flowers! The remainder of the project also flows with the up hill design. A unique feature of this set is the baby blue shed featured on the far right side of this build it contains lawn care equipment and tools and a work bench. As seen through renders there is a dock built into the water. The dock has some chairs and a glass table. In the water there is a fully detailed pontoon boat! Also thanks to LegoBricker for doing some nicely detailed water! On the dock is four fisherman representing my family. Three are fishing while the fourth is setting up his fishing gear. The dock has a stairway leading up to the most detailed of the project, the house! The house again is a white some what cottage style.  It is built to contour to the hillside. There is a nice deck that is built off the the house to which the stairs connect. The deck contains 3 mini figures to represent more family and the grandparents pet dog. There is also four white chairs on the deck. Moving inside there are to sets of sliding doors one on the right and one on the left both entering the house. On the left there is a dining table which is red and three chairs with a fully detailed kitchen including stove, sink, cabinets and a counter. To the left is some gray chairs to replicate couches, probably could have done better but had limited space to work with. And a green chair to represent a rocking chair. There is also a tv on an entertainment stand. Behind all of that is a bedroom and bathroom in one! The bedroom/bathroom features a purple bed, toilet, shower, and sink. On the right side of the exterior house, there is a small porch with a yellow out light. And there is also a tomato plant growing up the side! there is also a fully detailed chimney. Since the house contours to the hillside there is space under the house and deck which is used as a storage room including a door to get in!  This set contains nearly 1600 pieces and would sell somewhere in the $100 to $200 US currency range.

Thank you so much for checking out this project please smash that support button and let's get to 10k! When we reach 1000 supports there will be a new update with a boat house.