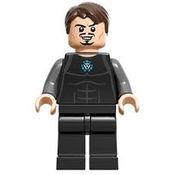 Iron man is my favorite marvel hero and I've been waiting for a complete model of his basement to be made by Lego but, to my disappointment, they never made a full one. So I did.

Tony Stark's Basement is complete with features from the 1st and 3rd Iron Man films. It is filled with different pieces of Stark technology including:

The set has eight minifigures including:

The set obviously includes Tony Stark and, of course, his assistant Pepper Potts.

The set has four of Stark's flying suits, enough to fit the display case. The suits can be taken apart and used in the suit changer or for testing Mark XLII.

The black tile testing floor opens up using trapdoor pieces and the suit changer comes out of the floor when Tony needs a dress-up. When not in use the yellow Technic pieces fold up under ground and the black tiles close flush with the testing floor. It has two studs in the center for Stark to stand on and maintain his position.

The big black circle tile next to the platform opens, also using the trapdoor element, to reveal the suit storage area which you can use to store all of your other iron suits.

Many of the transparent blue projection screens are on hinges so you can position them any way you want.

In case you want to use the set as more of a base rather than a basement I added slide-out steps under the examination chair for an easy exit rather than jumping off the base.

The basement dose not include space for Stark's prized cars. Although, I did insert Technic bricks with connector holes so that you can create your own car platform and attach it to the side of the basement.