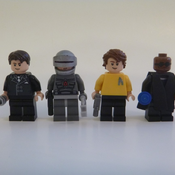 The Music video for the White Stripes song "Fell In Love With A Girl' was a LEGO stop motion video. For this collection I have recreated two of the scenes from the video.