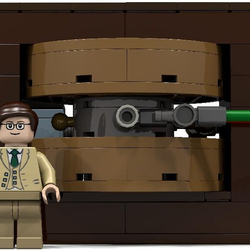 This project is based on one of the most recognizable passenger and freight locomotive of the mid-20th century, the 4-6-2 Pacific class.

Such locomotives were built and operated on American lines from the 1900s to the 1950s, manufactured by companies such as ALCO (American Locomotive Company), Baldwin, and the USRA (United States Railroad Administration). The Pacifics' design allowed it pull both freight and passenger trains with ease. Several locomotives of this class can still be seen in museums today; some are even operational.

This set is meant to be somewhat of a scale mode just as LEGO creates scale model cars. However, it can be geared for power (pardon the pun) with very slight modification (details will be posted in an upcoming update). This can be accomplished by adding a motor (or motors) to substitute the standard tender bogies. All details to found on a steam locomotive can be found from bell, whistle, pipes, compressors, and cab details. The couplers on the front, and those connecting the tender to the engine are old 9V style magnet connectors. I am currently attempting to compromise on this technicality. The coupler at the end of the tender is the new standard coupler; however, it's not as realistic as I would like.

In terms of price, I am unsure; but the entire set comprises of multiple pieces. This can present a complex build (final answer to the survey question!). Tracks not included; for display purposes only.