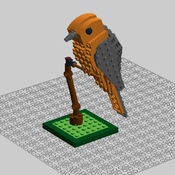 Whether cruising around the streets or on a top secret mission the Night-Cycle is ready for action.

The Night-Cycle is a large and classy motorcycle which can be used for both secret missions and just riding around the streets. The spiked wheels and intimidating machine gun can put anyone on edge, but its sleek and dark design give it a suave and manly feel. In addition the machine gun can detach using a variety of technic pieces and become a completely separate ship if so desired. Since the machine gunner steers the entire motorcycle, when the ship detaches, who will drive the rest of the motorcycle? Well, when the ship detaches, a hidden cockpit is revealed with steering wheel and computer face. In addition the lone rider has a side gun and front guns at his disposal.

The Night-Cycle set would make a good official LEGO set for a variety of reasons. It is both creative and unique, not to mention clever and well built. The technic pieces for the wheels and guns make it functional and stable for easy playing. The ship that comes off the motorcycle is easily detachable and easy to put back on. This set also could be easily incorporated into a LEGO theme or just be a stand alone set. That being said, this set could be pretty challenging for the young builder but easy and fun to play with otherwise. Happy building, and please support!