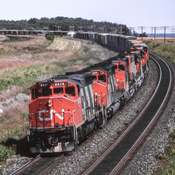 By ElliottB
29 comments
The MLW M-420 was a diesel-electric locomotive manufactured between 1973 and 1977 in Montreal, Canada by the Montreal Locomotive Works. A total 88 units were built for Canadian railways, including eight B units built for the British Columbia Railway; most of production went to Canadian National.[2] Only seven units were sold outside of Canada, to the State Railways Institution in Venezuela and Providence & Worcester in the United States.
The M-420 was one of the first locomotive models (along with the EMD GP38-2) to use the wide-nosed Canadian comfort cab, pioneered by Canadian National. By the early 1990s, variations on this cab design had become the standard of the industry. As with wide-nosed General Motors Diesel units from the same period, references to the model commonly add a "W" at the end of the model name, but it is not part of the official model designation. Most M-420 units rode on MLW ZWT (Zero Weight-Transfer) trucks.
This is an updated version of my creation with new handrails, redesigned rear exhaust hood, new truck design and I repositioned the horn near the rear.