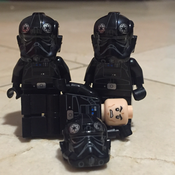 The Amphisbeana is a mythological serpent with two heads on each end of its body. It feasts on ants making it known as the Mother of ants. It is said it was spawned from the medusa's blood when it spilled over the Libyan Desert.

I built it ecause i love Greek mytholo And all its creatures in its stories. I think it will make angood lego set becsuse many people share my enthusiasm about Greek mythology and for those eho dont have a chance to learn more about it and their fascinating creatures. Also many Creatures in Greek mythology could be used to play with other themes and let kids imagination fly.

opening jaws on both heads.

small but has a lot of personality and movement