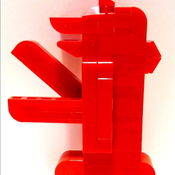 We (my sons KuStiller08 and BrStiller13 and me Stiller22) are very pleased to present our common project that illustrates LEGO as a multifunctional toy for the whole family, from the youngest to the oldest.

We have enjoyed every stage of the project: developing the idea, designing and building the LEGO Kicker and last but not least playing it. It works better than we have expected.

Regarding the sidewalls, we replaced the earlier used green bricks by transparent bricks that allow ample light and enable even the very small children to play or watch the game (if playing on the table).

The football players can (or should) be created individually by choosing, for example, the colors of your favorite football team.

The football arena is built by using LEGO and LEGO Technics bricks. In order to exploit the whole spread of bricks offered by LEGO as well as to provide more scope for contribution for our youngest “designer” BrStiller13, we added the LEGO Duplo base and indeed, my youngest son suggested to include the holes for extra balls.

We would appreciate your support so that everybody can enjoy the LEGO Kicker as much as we do!!!