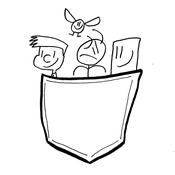 By PocketAnimations
46 comments
In 1986, 9 years before the first feature length animated film made completely with computers was released, a relatively small company that was steadily losing money released the short film, Luxo Jr.
This is a LEGO interpretation of one of the most iconic lamps ever to be animated, Luxo Jr. With many moveable parts, the PIXAR logo, and the also iconic Luxo ball, this is something any fan of animation would love to have.
One of my favorite PIXAR shorts is Luxo Jr., and one day I decided I wanted my own LEGO version of it, so I quickly got to work creating it. It took a few months, but now it is ready to start gaining supporters.
This would make a great LEGO set because it is very moveable, just like in the animation (making it great for stop-motion). Additionally many people would love to have a LEGO interpretation of the landmark PIXAR short.