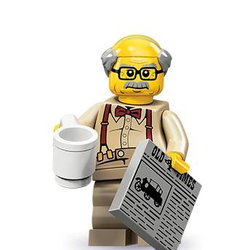 This Lego set is based on the television series Columbo, a Police Lieutenant solving crimes around Los Angeles. The show ran from 1968-1978 on NBC and 1989-2003 on ABC with 69 episodes. Columbo was a part of The NBC Mystery Movie, which was a collection of crime TV shows.  In addition to the Columbo minifigure, I have included one dog, one detailed car, and one magnifying glass.