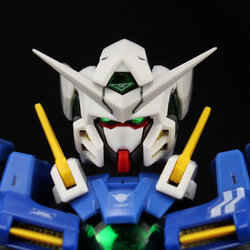 Guardians of the Acheron

The king of Acheron ended his long sleep and woke up. The only thing he wants to do is connecting the Acheron, the human world and paradise and being the only king of these three worlds. In order to reach this great goal, he turned some animals from human world into his personal guards and soldiers-- Guardians of the Acheron. Then he led those guardians and many monsters he brought from Acheron to invade other worlds. (This is the story line I made up by my own!)

Panther Guardian: The first animal the king turned into soldier. Panther Guardian was given human-like body and intelligence to understand human language. He is so proud of his sharp claws and sneaking in the shadow. The ferity of panther will let him destroy everything with his supreme power, the best warrior and killer ever. I used many dark color bricks to show a ferocious character from Acheron. I also made two claws with movable fingers. The sword can be attached to his leg and the cape can be attached to his back. These two parts are optional. I gained a lot of experience from previous Lego action figures such as Bionicle so I rebuilt it several times to make sure the movability is good. You will definitely enjoy this set.

Based on many years of experience playing Lego Bionicle series and another series with action figures included such as Hero Factory and Legend of Chima, I took a two months building and modifying my Panther Guardian. I also did some research on the skeleton structure of panther and leopard, especially the hind leg part.