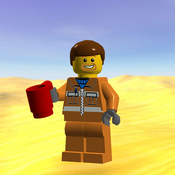 I have upgraded the machinists lathe with a more interesting floor and I have solved the tile problem at the end of the lathe so the tiles could be fitted in there.

More stuff could be added, but I dont want to clutter the build up in the front. Unfortuneatly  lathes are pretty boring on the rear side of them. As they are production machines and not art.

I could see the be standing in an office of a machine shop, or in the in a man cave. This is not intended for children to play with but more piece for the elderly childern (see adults) to build ones and let it stand as a model.

I got the idea from a lathe from my work, an American pacemaker it is from the 1930 to 1945 period. So it proberly arrived in Denmark as a part of the Marshall package.

In real life this machine is huge, a lot of iron have gone into casting this tool. But it works and it does seem indistrutable, not like the lathes which comes today which almost breaks just by looking at them.