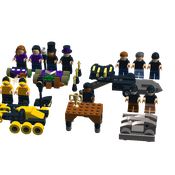 Now for the first time ever you can recreate the greatest robot battles from ABC's Battlebots!  This set includes four teams, Witch Doctor, Tombstone, Stinger, and the champion Bronco! It includes 12 minifigures, with each team member for the four teams and the announcer Faruq Tauheed! Create your own tournament to win the famed golden nut! Battle against obstacles from the arena, like the spikes, hammer, and plates.

This set includes 285 pieces, with around 45 pieces per bot, with all bots being able to recreate the actual attacks from the battles.

Suggest new bots and replacements, but in the end we can only have four bots, so who will win the golden nut?