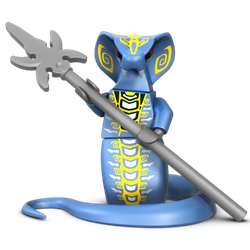 This is the Condrai cave in which the Ninja's fight the Anacondrai warriors. You can see the venom teeth inside the cave; these are fatal for the Ninja's.

Also, there is a secret cave tomb which can be opened and hides a secret.

There is a spider web on the wall and next to it a snake. It's like they want to say: "go away!" They're dangerous for the ninja's.