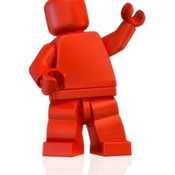 I've always wanted the sets 3300003 and 40145 because they were lego versions of lego stores, which are awesome. So I decided to create my own version of a lego store(even though I may get the set 40145). This set would be great for any shopping trip for a minifig. This set includes a pick a brick wall with many bricks, and a whole bunch of lego sets! The lego store brand ribbon is included, running along the walls. The customer seems to have picked up an immensely big lego set that he wants to build. A cash register is right behind him and we have one store employee. I even added Brickley to the scene! This set can be a good model display or play set, as the walls fall down as one piece. Any lego minifigure can now have fun! I originally intended for this set to be a lego store that I could keep to make me feel better about not getting the other sets, but it could be much more! Thank you for supporting, looking, and following this project!

I'm also creating a sequel set to represent after shopping, so keep an eye out for it and don't forget to support! If you can't find it, just check my account.