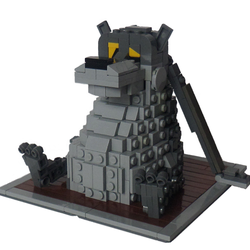 This is my brick-built Triceratopses!

Triceratops is a genus of herbivorous ceratopsid dinosaur that first appeared during the late Maastrichtian stage of the late Cretaceous period, about 68 million years ago in what is now North America. It is one of the last known non-avian dinosaur genera, and became extinct in the Cretaceous–Paleogene extinction event 66 million years ago. The term Triceratops, which literally means "three-horned face", is derived from the Greek tri- meaning "three", kepak meaning "horn", and ops meaning "face".

I tried to make it the splitting image of a original dinosaur with little cute cubs). So I think you would like it's looking or even can play with it ;)

So, if you want this Triceratops to be a trim of your shelf, vote for the project and share the link with your friends and followers, the project has to reach 10,000 supporters!

Check my another projects: