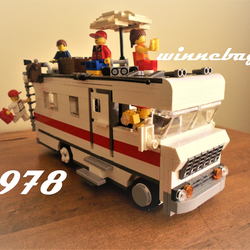 This thin-nosed spaceship was designed in physical form a while ago, but I decided to improve its design on Lego Digital Designer due to my lack of physical bricks. It is named after its thin, long, and sharp nose that resembles that of a knife blade. The nose was tweaked slightly, and its resemblance to a knife blade became less obvious, but the name stuck.

The main difficulty in creating the prototype of the Blade's Edge was designing a four stud wide body and cockpit that connected to a long nose only one stud in width. After about 15 minutes of thought, and a few hours of searching for that one brick that I couldn't find (even though I had seen it several times when I didn't need it), the first version of the ship was complete.