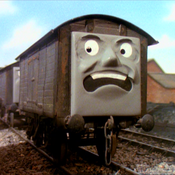 By Trainboy7
4 comments
I have this idea for a Lego video game for PC. a Game where you get to build your own Lego railway! Now I know what your thinking. "didn't they already made a game like that called Lego loco back then?" well they did but this one is an updated version! it'll be like some of the other popular Train games like "Train Frontier Express" or any of the other "Trainz" games made by auran. if you get my drift.

Features that are in the game:

more track pieces (turntable and such)

all buildings can be turned around

customize your own building, locomotive and rolling stock at the engine shed

you can visit other player's layouts

new veicles (and you can drive them too)

the abilitie to uncouple cars and have another engine take them

be sure to support this if your a Lego Rail fan.