By SenatorBlutarsky
19 comments
I've always thought that a harbor or seaport would be a great subject for a LEGO set, but I'm still waiting for it to be done right. Every offical set, including the 7994 Harbour set from a few years ago, has been a bit of a disappointment for me.

The fundamental problem with the existing harbor sets is scale. At one end of the scale there are container ships and bulk carriers measuring 250, 300, or even 400 meters. At the other end of the scale are the harbor workers (less than 2 meters tall) and trucks and rail cars (approximately 20 meters long). If you wanted to build a large container ship at minifig scale, it would be about 1,000 studs long. Even at a smaller scale, one compatible with 4-wide vehicles for instance, the big ships would still be close to 500 studs long.

This project is my attempt to address the scale problems I see in the existing harbor sets. Instead of trying to include "small" details like the trucks, rail cars, and workers, this set tries to model the main features of the port -- the ships and the port facilities -- at a compatible scale. I settled on a scale of a about 1:900 (i.e. each stud represents a little more than 7 meters). At this scale, a semi tractor-trailer truck would be less than one plate wide, less than 2 plates high, and about 3 studs long. As I note below, I had to "fudge" the scale slightly on a few of the components, but for the most part, everything is faithful to this scale.

The set consists of the following components:

* The main port facility, including an LNG terminal on one side and a container terminal on the the other.

* A breakwater with a lighthouse on one end.

* An LNG tanker, modelled after the Suezmax class vessel Arctic Princess (I love its orange and white color scheme).

The harbor tugs are 2 studs wide, which makes them slightly out-of-scale (a large tugboat would have a beam of 10-11 meters, but at the model scale, 2 studs correspond to about 14 meters).

The containers are also about 2 to 3 times too large in each dimension, but I had to compromise on this point because, given that each container is only 1 stud wide by 2 studs long by 2 plates high, the only way to have an accurately sized container would be to make the ships (and everything else) that much larger.

In the main picture above, we see the entire seaport, with the breakwater and lighthouse off to the right. The container ship is already docked and waiting for the gantry cranes to go to work unloading it. A group of harbor tugs are easing the big LNG tanker into the LNG terminal. A Coast Guard Cutter is heading out to sea to go to work maintaining a set of buoys.

The picture below shows a closer look at the row of gantry cranes on the container terminal side of the port. There are several warehouses and liquid storage units in the background, along with a stack of already-unloaded containers. If you look closely, you'll also see a railroad spur that runs under the gantry cranes.

The gantry cranes are all fully functional. The cranes can slide along the pier, following a set of two depressed "rails". The crane trolleys can move along the crane rails. The hoists can be operated via an articulated joint mechanism. The hoists connect to the containers via a single knob (note that the two pieces of each container are connected by two studs, so that the containers should separate at the right places when they are pulled apart). My belief is that the articulated joint mechanism, while not entirely realistic, will have better playability than a cable-based hoist. However, the cranes could easily be converted to using a string to raise/lower the hoists using a cable scheme such as the one shown here. 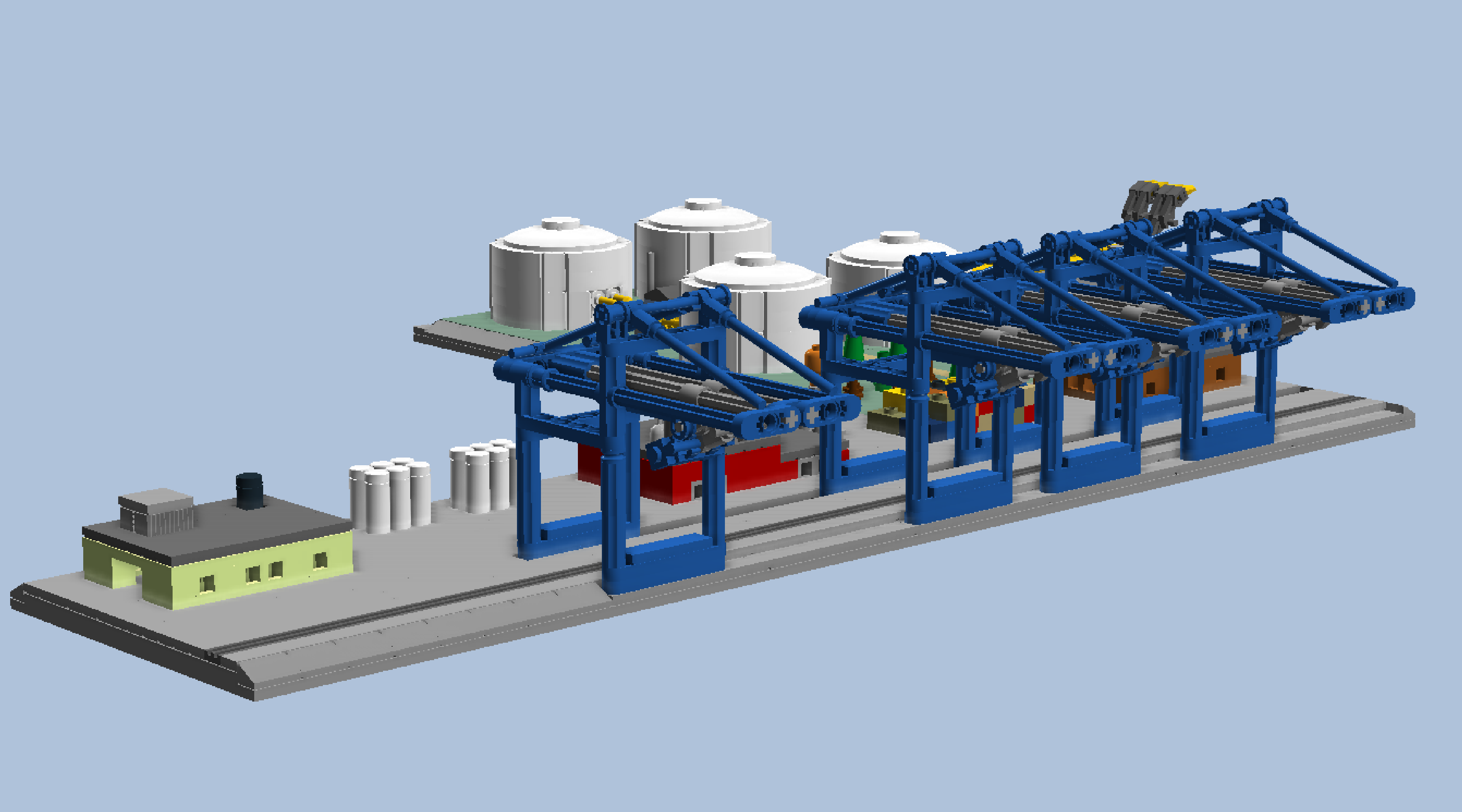 The picture below shows a closer look at the LNG terminal. There are four large storage tanks, two utility buildings, including a dirt road leading up to them, and a network of pipes to connect the tanks to the LNG offloading facility. There are also several trees separating the LNG and container terminals. The booms of the LNG offloading dock can be raised/lowered to engage with the nozzles on the LNG tanker itself.

More pictures of the container terminal can be found in my Micro Port Facilities Flickr photoset. 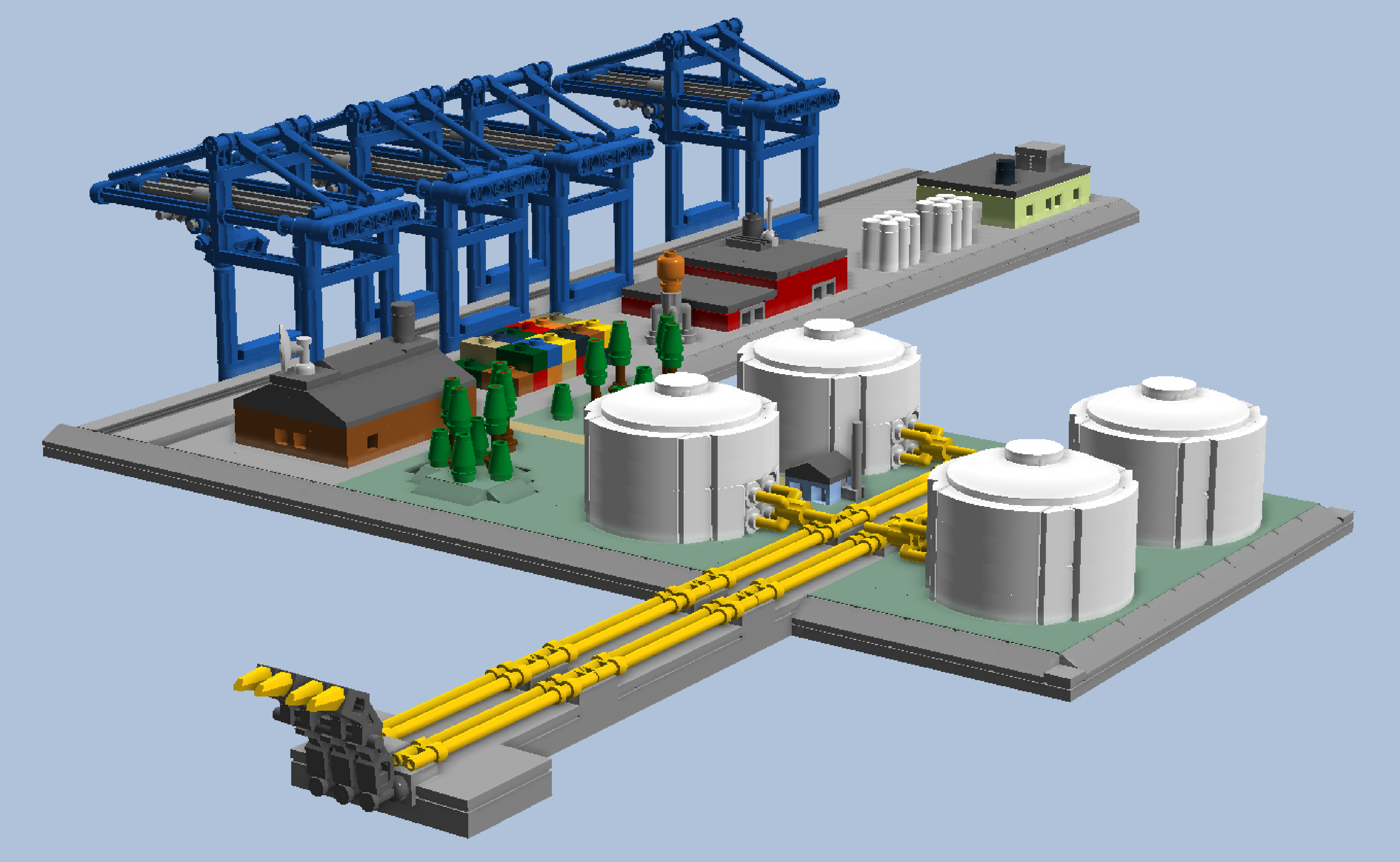 The picture below shows a closer look at the container ship. It is 45 studs long and just over 6 studs wide, representing a vessel that would be appromiately 325 meters long with a beam of 46 meters.

More pictures of the container ship can be found in my Micro Container Ship Flickr photoset. 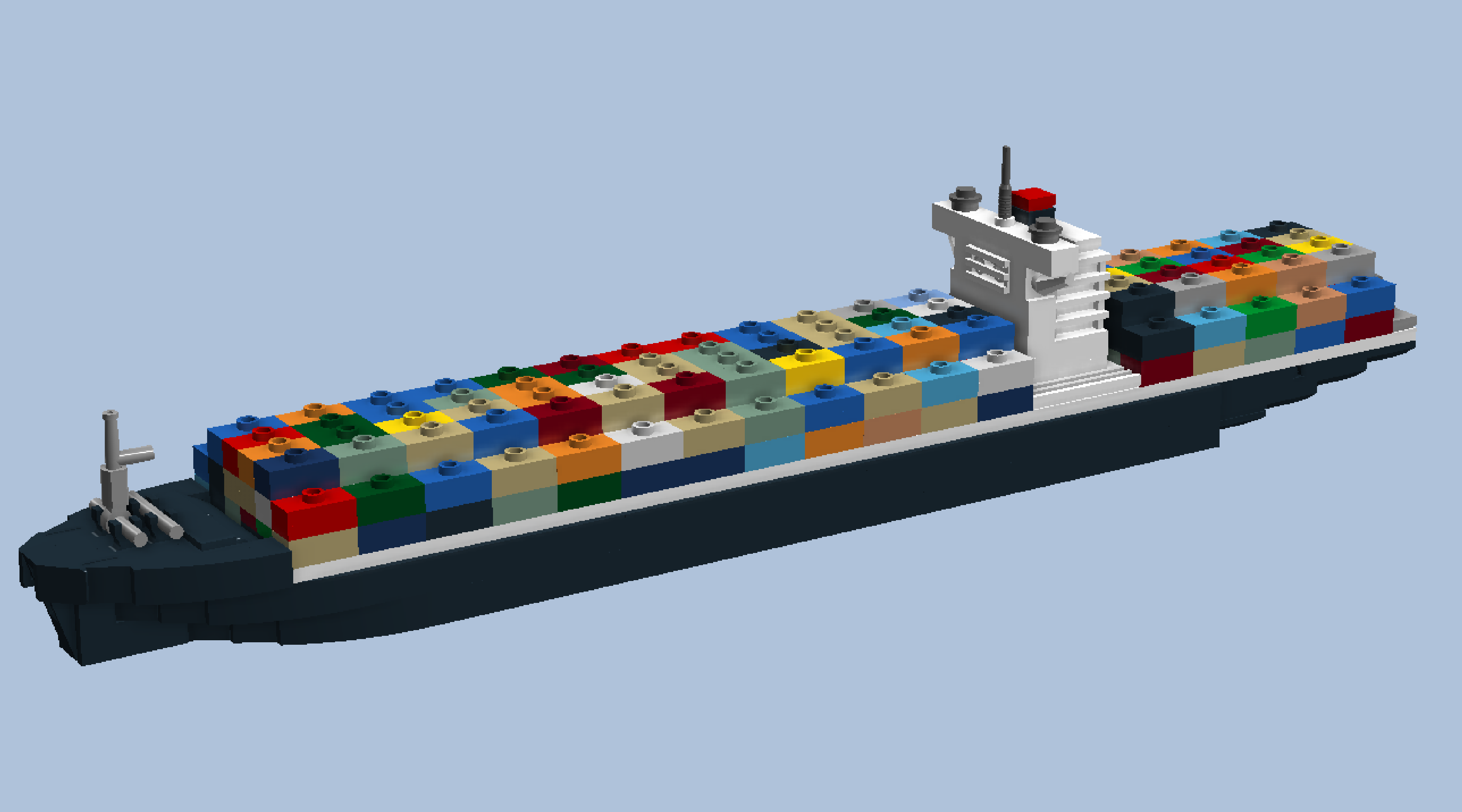 The picture below shows a closer look at the LNG tanker. It is approximately 39 studs long and just under 7 studs wide, representing a vessel that would be appromiately 288 meters long with a beam of 49 meters.

More pictures of the LNG Tanker can be found in my Micro LNG Tanker Flickr photoset. 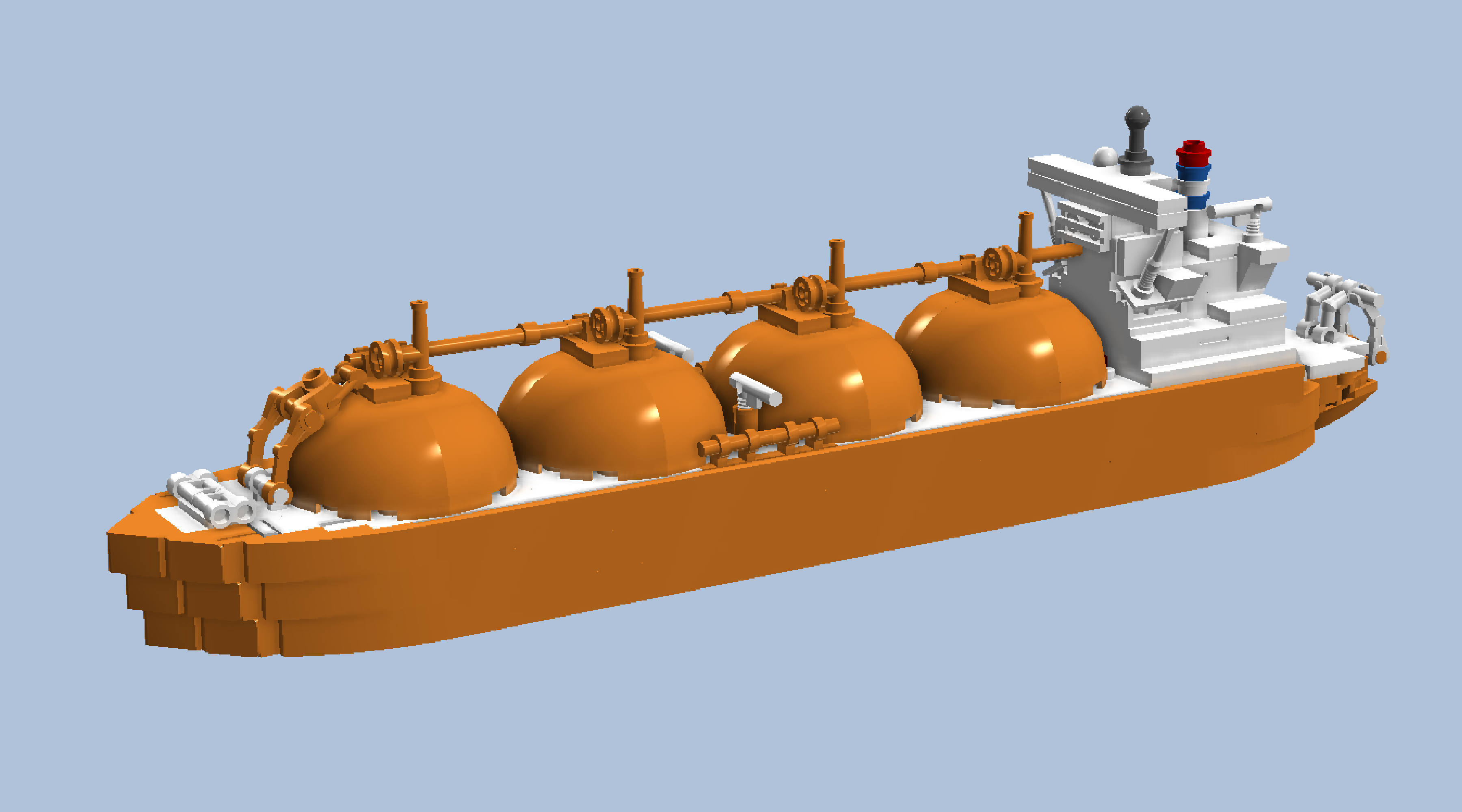 One of the great features of a micro seaport project is that it could easily be made modular. For instance, if this project were released, one could envision modular follow-ons such as:

* A crude oil tanker and an oil off-loading facility.
* An ore carrier and a pier with a row of cranes to unload it.
* A drydock/shipyard with a new freighter under construction.
* Another container terminal with level-luffing harbor cranes, rather than gantry cranes. I already have most of the design for these micro level-luffing cranes done, but I used the gantry cranes because I like the way they look better.

If you like this project, you might also like some of my other projects, including the UCS Double-Ended Ferry, the Apollo-Soyuz Mission, and the Superheavy Multi-Axle Transport Rig.