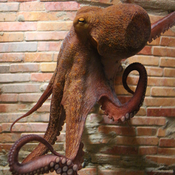 The "Exploring Probe 1", is one of my first projects on Lego Ideas and also the first space ship I've ever built, so I'm pretty excited about it. At first I wasn't so sure about it and indeed it looked sort of odd, but as it unfolded it started to look better and better until it finally turned into this. This idea doesn't have a lot of functions (as many other space ships do), but it does have the following: one large jet engine with a light brick right behind it that you can press, two smaller engines underneath the wings, two spring loaded missiles on each wing, a chair and a small control panel in the cockpit and one explorer minifigure. Thank you for checking out my project and would much appreciate a support!!!