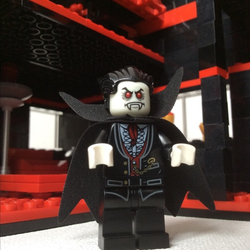 Say goodbye to old drafty castles vampires used to dwell in. Across the world, vampires are moving into cities. The modern vampire has a smaller living space than an old crumbling castle, but is able to afford upkeep on a home in the city. This home was designed specifically for the modern vampire.

Living in the city has many advantages. The modern vampire saves both time and money being closer to his food. His hired help is only a few minutes away. Many city attractions are open at night and allow any vampire to escape from boredom periodically.

The home features a kitchen that comes with a specialized beverage station. The beverage station keeps our modern vampire happy. The station can store and preserve blood for over two years. When the vampire needs a drink, the machine will serve a beverage at 98.6°F (37°C).

Home entertainment keeps the vampire and his guests entertained. The modern home is equipped for cable and internet. This vampire enjoys watching movies and sleeping all day. His favorite movie changes every year. He shops on the internet, and likes red light.

The bedroom features a lidless coffin for a comfortable rest during the day. The vampire pictured here has been known to rest for several months at a time. He got a special rug that feels soft on his feet when he gets up at night. The rug never needs to be cleaned because it contains a bacteria that oxidizes impurities.

Special windows allow people to think they see an interior of a normal home. The windows show what people would expect to see. The windows also function to block out a key part of the light spectrum that harm vampires and cause them to burn. If the modern vampire wants to stay up all day and watch movies, he can do so.

The rooftop offers a great view and a place to look up at the night sky. Our modern vampire has a dish on the roof that allows him secured satellite communication to the vampire network. The roof serves as a place for parties. You will notice this vampire enjoys growing red flowers.