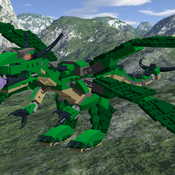 My idea was inspired from the LEGO dragon I already had, I just improved it in lots of ways. I added another set of wings, made the arms and tail super flexible and increased the size greatly. I created this with LEGO Digital Designer, and this took me two and a half hours of working time to create.