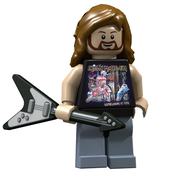 ~~The CCS-1 Star Shuttle apears at the end of Star Wars Episode 1. Senator Palpatine
and the Jedi Council use the CCS-1 Star Shuttle to travel from Coruscant to Naboo to meet Queen Amidala.
This type of vessel is manufactured by the Corellian Engineering Group with a lenght of 80 meters.
In Episode 1 it is colored in red and white, the color schematic for neutral diplomatic vessels. The same colors are used on as the Republic cruiser that you can see in the beginning of Episode 1 and also in the Lego set of the Republic cruiser.
I collected these information from different internet sources and the movie.
Some sources said that the CSS-1 Star Shuttle used by Palpatine is called „Perpetuus“. Hence, I decided to give the ship this name.

I decided to built this ship build because it is still missing in the collection of Star Wars Lego sets and dedicated collectors like me want them all!
On first sight the model did not seem to be very attraktiv, but after watching Episode 1 again, picture by picture, I discovered many great details in the design. Amongst these were the round shapes of the vessel,  the 3 big engines at its end and the wings as of the Blockade Runner and the Republic Cruiser.
I start to build the shapes in LDD and I was very surprised that the ship looked pretty cool as a model. After adding more and more bricks to built all the details, the model shows its full beautiful shape which are not clearly visible in the movie.
The hardest part was to build the front cockpit sektion. But after trying at least 5 different versions I came up with the current cockpit setup.

Here is some information about the model dimensions.

2550 pieces (its just my second MOC/LDD model, but I think I can reduce the number of pieces if neccesary)

After finishing the hull and the inner structure I also added playable content to the model.
Inside there is the crew sektion containing 3 minifigures, 1 pilot and 2 flight officers.
The meeting room is occupied by some Jedi Council members  and Senator Palpatine's office is located in the back.

I hope young and old will like the idea to get another Lego Star Wars vessel.
If you like it, please support the idea, and dont be shy to give me feedback.