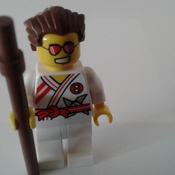 During Lord of the Rings: The Fellowship of the Ring there are a few brief scenes in which the shards of Narsil (The sword of Elendil, which was destroyed in the siege of Dagorland) is shown on a stand before a painting depicting the fall of Sauron. It is reforged by the elves of Rivendell and is given to Aragorn the heir to the throne of Gondor and Arnor.

I think it would make a great set because it is a small part of Rivendell that is recognised as iconic. Having this as a lego set would make people aware of the importance of this sword.