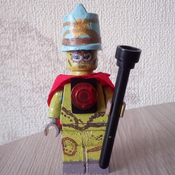 Hello, I want to present you an antique car in the style of the 1920s. I made it in black, since most of the cars of that time were black in color, rather than blue, green, like now. Now about the design.

My model has a canonical radiator grille with a top cover, curved wings over the wheels and a spare wheel under the hood above the left wing. When playing, you can remove it and make a replacement wheel.
The roof is easily removable so you have access to the cockpit. Interior is simple, there are all the main controls. Also behind the seats there is a luggage compartment, where hats and cases are put, when the mini-figures are seated in their seats. To access the trunk, you need to remove the panel, picking it from the side. This is easy to do because it stands on two round pins 1x1.

Also, for a more realistic bottom, I also worked a bit, so that it does not look flat and toy.

Drive a car two businessmen in elegant suits with hats and cases.