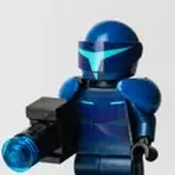 By Dark Samus
7 comments
These are the 3 main bosses from the classic video game Super Metroid for the Super Nintendo!
(Left to Right)
Kraid - A gigantic green dragon-like menace who is larger than the in-game screen itself!  As a matter of fact, Kraid is the largest creature on the planet Zebes.  Kraid has a wicked tail and tongue along with 3 sets of spikes that shoot from the belly!
Mother Brain - She has her EYE on you!  When not enclosed in her classic glass case, Mother Brain can summon a half organic, half mechanical Chozo-like body to attach to her orange-ish spikey brain!  In this form, she can spew a purple toxic gas from her mouth!
Ridley - The smallest of the trio but don't let that fool you!  Ridley is a fierce dragon-like creature with a super long tail, razor sharp fangs/claws and the ability to fly.  If you do manage to achieve a victory against this purple nemesis, you can rest assured that Ridley will be back for revenge!
These are actual builds from my own collection.  They are intended to be cute and fun!  One could even say that they are "baby" versions of the characters.  (Baby Ridley! Awwwww ;D)  I wanted to post something for the 35th anniversary of Metroid and I thought this would be cool.  It's hard to believe that it has been 3 decades.  Looking back, I feel so lucky to have played these video games as a kid when they were first released.
Thank you for your support!
P.S.  I took these photos myself.  I think they turned out decent but please go easy on an old nerd XD