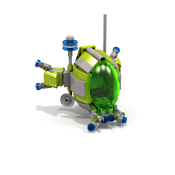 Nature is often a wild and unforgiving entity requiring a strong will and quick mind to tame. The Forest Guardian has realized the potential within herself and has learned to harness the strength of the wilderness to defend the land. Whether she is exploring the wilds in search of adventure, or to vanquish a threat to her home and animal companions, the Forest Guardian is a strong, intelligent and resourceful champion.

This set is constructed around a forest theme, with the hollow tree able to be opened to expand the possibilities for imaginative play. Features the following:

Simple enough for a child to build, the asymmetrical appearance and design are meant to encourage the creative side of the builder, to look at the model from many different angles and to interact with it in a manner which a symmetrical model would not encourage.

The look can be easily and drastically changed by simple alterations in tree coloring or leaf coloring as illustrated in the final two images included.