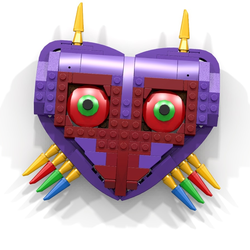 "It's dangerous to go alone, support this!"  2016 is the 30th anniversary of the Legend of Zelda franchise, and what better way to celebrate it than building your very own Lego Majora's Mask!  The mask sets on a stand which can easily be removed.  This set contains approximately 236 bricks.  I plan on releasing at least on set based on each Zelda game this year, ending with the new Zelda game for Wii U, so stay tuned for more amazing Zelda projects!  While you are waiting, you can support this awesome Zelda set by Ragaru, https://ideas.lego.com/projects/126855.