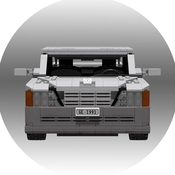 By d4n33l
13 comments
W140 S-Class is a legendary flagship from the '90s, manufactured by Mercedes-Benz from 1991 to 1998. The most powerful and outstanding serial version were cars with the 600 index, equipped with a 6 liter V12 engine. I would like to introduce you one of them, 1991 Mercedes-Benz 600 SEL, made in the original two-toned Silver Metallic painting.
The idea to implement this model came to me in February of this year and it is the year that W140 celebrates its 30th anniversary. I think that it is one of the best cars ever made, so it might become a great LEGO set, considering that W140 himself is a REAL BRICK.
I tried to realise all of the main options of the original car, such as the opening sunroof, full size spare tire and, of course, V12 engine under the hood. The interior made in the solid black colour - serious car for serious people.
Since I am a big fan of license plates, I selected three corresponding numbers for this set: German, it contains the car's index; Russian, which contains information about the car's body number; Swiss, containing the year the car was manufactured.