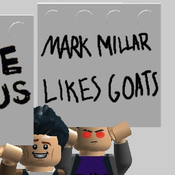 “Nextwave is a pirate superhero fight comic,” it is one of the best series to be released by a major publisher in recent memory. It is a delicate balance of humor, action, and adventure bringing together a disparate collection of characters, many classic and some new. Our five main heroes - Monica “Spectrum” Rambeau, Tabitha “Boom Boom” Smith, Aaron “The Machine Man” Stack, monster hunter Elsa Bloodstone, and The Captain – pilot The Shockwave Rider seen here Lego glory.

I have done my best to recreate the Shockwave Rider in Lego brick form with the hope of bringing the Nextwave team to a new generation. This model brick set would be geared as a “Rebranding” taking place after the events of the initial series of comics. The Nextwave team is now trying to go legitimate as they fight alongside the likes of the Avengers and X-Men to save the world… of course, much like the Guardians of the Galaxy, they’ll do it in their own special way.  Changing their name to “Nextwave: Agents of L.E.G.O.”, an acronym standing for “Legally Enforced Good Objectives,” the team is ready to face off against the Marvel Universe’s most notorious villains.