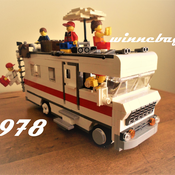 This is a simple display of Bob's boring life.  Bob is just an average Joe that works at an average office for an average company. Stereotypically, he enjoys coffee, and is scared of clowns. I have included pictures of both the original model and the LDD version of the model. The LDD version is (I believe) superior in all aspects, except the color of Bob's suit. I would prefer Bob's suit to stay in his signature gray color. I only added pictures of the original model for comparison. The true final version of the model is the LDD version, aside from the fact that (as I said before) Bob's suit should be gray.