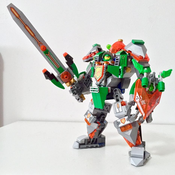 I present to you unit HMB-73 codename Honey Rumble. Three years in the making, this massive machine of power started out as an arena mech battling it out with other behemoths. A champion for 5 years it's pilot and operator decided to retire his mech from combat and dedicate it to exploration and mining. Modified to move in heavy gravity planets, Honey Rumble combs caves and abandoned mining colonies hunting for rare mineral samples and lost technology.

Honey Rumble uses elements from The Lego Movie Emmet's Construct-o-Mech set, mainly the shoulder pads and construction vehicle wheels. It also comes with a reconnaissance drone attached to Honey Rumble's back for advance positioning and mapping of a specific area. This mech has ball sockets for both arms, feets and ankles for a wide range of motion.