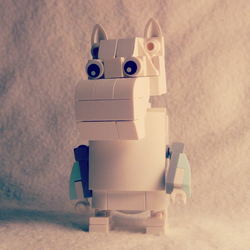 I had some spare pieces on my table, so I decided to build a small model out of them. The Steampunk Airship is a small, one-passenger airship.

The ship consists of a small balloon (or zeppelin) filled with either helium or hydrogen. It has a big engine in the back which makes the ship fly forward, and two small propellers under the gondola, which allows the pilot to turn the ship around.

The gondola has luxurious detailing, such as golden and dark red pieces.

There is one pilot included, too, and I believe he´s an adventurer, or perhaps a business man in the Steam Corporation. You decide!