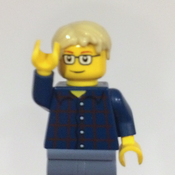 By BrixGoFar
16 comments
LEGO bricks... made of LEGO bricks!
This wide selection of bricks in many shapes and colors connect just the same way the smaller versions do. All the bricks are scaled up 6 times and follow the same dimensions, 3 plates are one brick tall and so on. The possibilities for connections are endless!
1x1 Tile: This small light green brick follows the 6-1 ratio. It can be stacked on top of other bricks or can be flipped upside down to be a small tray.
1x2x3 Sloped brick: Flips open with two storage areas. The open stud on the top lets pieces be dropped in.
2x2x3 Drawers: A classic storage piece with two drawers. Each drawer can be taken out and swapped.
1x2x2 Brick: Has four rounded drawers, perfect for storing small pieces. Each drawer is divided in two sections for a total of 8 bins.
1x2x2 Window Pane:  It is the same size as the 1x2x2 brick, but with a window! The top can be easily removed to slide the glass pieces out.
2x2x2/3 (1x4x2/3) Slope: This enlarged brick is two in one! The hinge allows the brick to become either a 2x2 or a 1x4. Flip the brick upside down to access four separate storage areas.

1x2x2/3 Slope: Take half of the previous brick, and this is what it becomes. Flip over the brick for two storage areas.

1x2 Grill Tile: Might need some bigger hot dogs to go on this grill, normal ones will fall straight through the hollow center!

1x1 Antenna:   Just like the smaller version, a rounded base allows this brick to rotate freely around a stud. The lever also moves back and forth!

2x2x2 Mailbox: How much mail can fit inside this upscaled brick? A lot. The front of the mailbox flips open and and can come off just like the small one. Or just throw the stuff in through the slits in the front and back.

2x2x2 Seat: This upscaled seat is a bit big for a minifig, but it makes a perfect seat for a phone or tablet!

Tiles: These storage trays can make everything from a 1x1 tile to a 1x8 tile and anything in between with the interlocking sections! Or even make your own tiles like 1x5, 1x7, or even 1x10. The hinged 1x4 tile also turns into a 2x2 tile for even more crazy tile combinations!