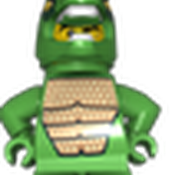 The Golden Gazebo has gone through many different forms over the corse of my lego world. It started as just an ordinary dome on four skinny poles. After that it transformed into the golden ninja's pavilion where it got it's cover but it was on four pillars. A little while after this I stumbled upon ideas.lego.com so I took it and turned it into what you see now.

The Golden Gazebo is 104 parts. It has a highly decorated golden cover, and a banister. The colors tan, Dark orange, and white in the pillars bring it nicely to the Green which in turn flows into the water. I included two minifigures; a lovely elven King, and Queen.

If you like this project please spread the word.