The only remotely comparable aircraft is the Canadair CL-415, but one Mars can do the work of more than 4 CL-415s and it has almost twice the endurance.

The refilling process can be very tricky, since the aircraft usually operate from lakes in hilly terrain.  The aircraft must land, refill its tank, and takeoff in the span of about 40-45 seconds in order to gain enough altitude to safely clear the nearby trees and mountains.  During this process, the pilot actually relinquishes control of the aircraft to one of flight engineers.  A similar protocol applies for water drops, with the flight engineers doing most of the work.

The Flying Tankers Mars aircraft have always been based on Sproat Lake near Port Alberni, BC, Canada (on Vancouver Island).  Although one Mars aircraft was lost in 1961 when its water release mechanism failed, preventing the aircraft from gaining enough altitude to clear a mountain range near the fire it was fighting, they have operated for more than 50 years since then without incident, which is remarkable considering the age of the aircraft and the danger inherent in the type of work they do.

I had a request for a view directly from the side, so here it is: 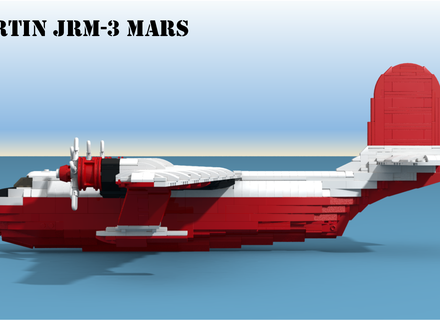